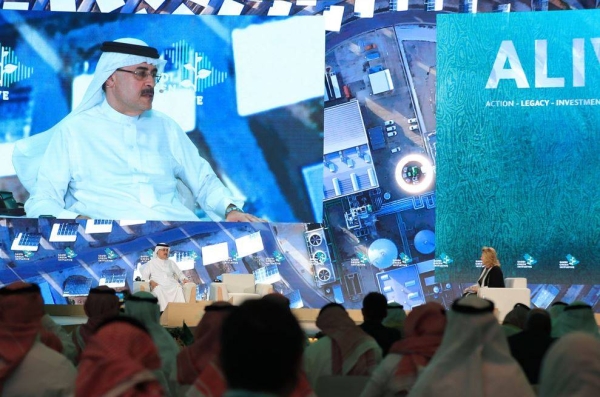 RIYAD – Saudi Aramco President and CEO Amin Hassan Al-Nasser explained that the Kingdom’s Crown Prince’s announcement to achieve net zero carbon emissions by 2060 is a landmark announcement and means a lot to everyone, and would create a suitable platform for Saudi Aramco and other entities in the Kingdom and around the world.

The president of Aramco underlined during the session, The challenge of the energy transition from major oil to major renewable energies, within the framework of the sessions of the Saudi Green Initiative (SGI) forum, with the participation of Patrick Pouyanné, president – Managing Director of the French company Total, which discusses keeping pace with transformation in the energy sector.

In addition, it has focused on developing innovative technologies for converting crude oil into chemicals, establishing new relationships within supply chains, expanding its petrochemical business based on innovation , sale of energy assets and investment in hydrogen production.

He indicated that the company will reach net zero levels through its operations by 2050, indicating that the transition path will be complicated for the company, including great challenges, but we are confident that we will achieve our goal by accelerating our efforts for low-emissions in the future.

Al-Nasser pointed out that the company has big ambitions in terms of hydrocarbons, and is working on par with raw energy and gas sources, and is accelerating the company’s work in oil production to reach 13 million. barrels per day, taking into account work on renewable energy.

We also have very big ambition in renewable energies, and investing in blue hydrogen and gas, while looking forward to increasing gas capacity.

He said investing in gas would allow us to eliminate hot liquids in the Kingdom, eliminate them completely within 10 years, and replace them with cleaner gas with less methane emissions.

Noting that since 2016, the world has faced a catastrophe due to lack of investment, since nearly $ 700 billion was spent in 2014 and now around $ 315 billion, stressing that this major drop would have an impact, and that the use of technology will help us find solutions to reduce emissions today and invest in technology.

He added that there are 12 centers around the world, including 9 outside the Kingdom and 3 in the Kingdom that focus on climate change, sustainability and finding solutions to emissions.

In turn, Pouyanné declared that Total has restored a new production system and set up a new structure based on supporting the climate change project, and is working on renewable energies by 2030, in order to balance the investment process in the field of energy and support the climate project. – SPA