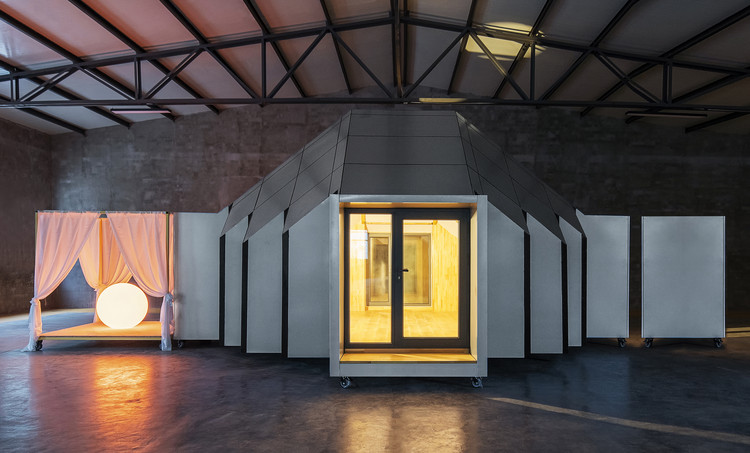 Text description provided by the architects. With the development of society, the traditional yurt, as the medium of grassland residence, could not meet the needs of modern life. Its spatial unity and physical properties need to be improved and modified urgently. Des Ger is a lightweight pre-engineered construction system designed to explore contemporary prairie residences, which consists of prototype design, space design, and system design.

The domed space of the traditional yurt is the embodiment of the spiritual world and core value system of the nomads, as well as the wisdom of coping with the natural climate. Geometric reconstruction is used in the design of the Des Ger, which continues the domed spatial shape and solves the problems of roof drainage, snow on the roof, etc. As the circular plan of the traditional yurt will leave negative space when arranging modern furniture, unnecessary negative space is removed to make the space more suitable for modern usage functions and provide more possibilities for places to outside the yurt.

Integral design. Enlarge and reorganize the prototype, release the spatial unity of the traditional yurt, and obtain a more diversified and open architectural space. The circular space of a traditional yurt is unique, which cannot meet the characteristics of private space and multifunctional space of modern life. According to the order of behavior in the yurt, four rectangular spaces are implanted in the design of the Des Ger to meet the needs of privacy and versatility. At the same time, the rectangular space also carries the function of connection and expansion between several prototype spaces. Therefore, several prototype spaces can be combined to achieve a more diversified and open architectural space according to different user requirements.