After losing nearly -30% from early March highs, crude oil prices have stabilized in recent days and again found reason to push higher. As the Russian invasion of Ukraine has seemingly reached a point of attrition, Russia’s refusal to withdraw its troops has prompted the European Union to step up sanctions once again. News that the EU may soon ban imports of Russian oil comes after the United States did so last week, threatening further disruption to global energy supplies. Crude Oil’s 3-day rally of more than +16% underscores the volatile environment that is likely to persist.

Crude oil prices have a relationship with volatility like most other asset classes, especially those with real economic uses – other energy assets, soft and hard metals, for example. Similar to how bonds and stocks don’t like the increased volatility – signaling greater uncertainty around cash flow, dividends, coupon payments, etc. – crude oil tends to suffer during periods of higher volatility. Heightened and sustained geopolitical tensions continue to translate into greater oil volatility, allowing oil prices to rise in an atypical way that will continue for the foreseeable future. 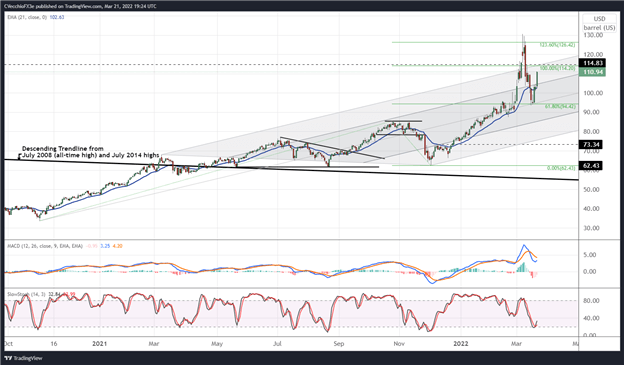 Crude oil prices are finding follow-up to the upside after the morning star candlestick pattern marked support in a familiar area around 95, where the mid- and late-February highs created resistance. A return to the 100% Fibonacci extension of the November 2020 low, October 2021 high, December 2021 low is likely (114.20) and beyond to the 123 extension, 6% Fibonacci (126.42); the yearly high comes a bit higher at 130.50. If the EU bans oil imports from Russia, a return to the top seems predestined; while the rebuttal of such a development could easily see crude oil prices fall back towards 95 within days. 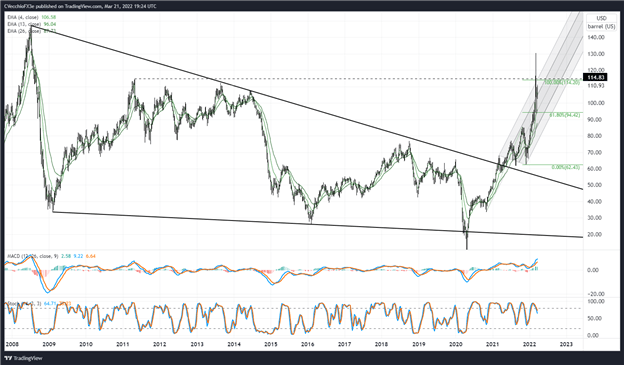 Crude oil prices had previously risen above the May 2011 high set at 114.83, closing above the said level in the first week of March. But the gains proved fleeting, with May 2011 fork resistance and the 100% Fibonacci extension serving as a formidable confluence of resistance. With a mostly bullish momentum backdrop – Crude Oil prices are above their weekly 4, 8 and 13-EMA envelope, the weekly MACD trend up and the weekly Slow Stochastic just outside of overbought territory – it remains the case that ”buy the dip’ remains the preferred approach. 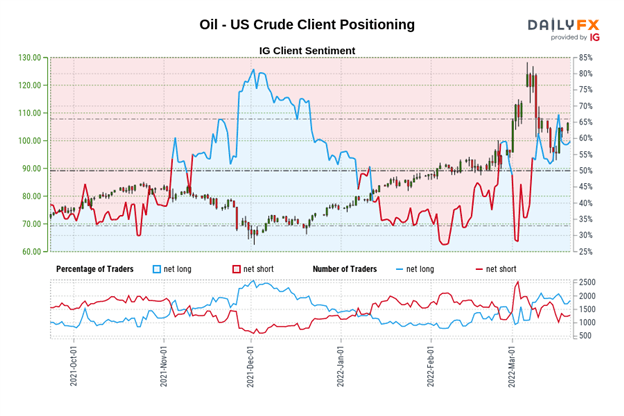 We generally take a contrarian view of crowd sentiment, and the fact that traders are net long suggests that US crude oil prices may continue to decline.

Positioning is less net-long than yesterday but net-long since last week. The combination of current sentiment and recent shifts gives us another mixed trading bias for US Oil and Crude.

element. That’s probably not what you wanted to do! Upload your application’s JavaScript bundle to the item instead.