The Workers’ Charter is part of the government’s new Queensland Energy Plan and outlines how the Queensland Government will meet its renewable energy targets and ensure a sustainable and affordable energy future for Queenslanders.

The charter guarantees every worker affected by the station closures a job with a government-owned energy organization. There will be opportunities for early retirement for workers nearing the end of their careers and new future opportunities for other workers. 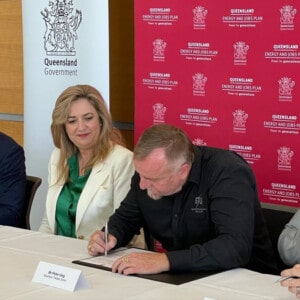 Legend: The ETU signed the charter alongside other unions, stakeholders and the state government. Photo: UTE.

“This plan is the first of its kind in Australia, it will see a $62 billion investment from our state government in clean energy assets and a just transition for workers and communities,” Mr Ong said. .

“We were involved in the development of the Energy Workers Charter from start to finish, and today I signed it on behalf of our union. The charter ensures that no energy worker will be unemployed during the transition to renewable energy.

“Our members in coal-fired power plants know that the industry is changing. They need a plan. And I’m convinced that the Energy Workers’ Charter is the security they need.

The Premier of Queensland recently announced new renewable energy targets of 70% by 2032 and 80% by 2035 and pledged to retain public ownership of the majority of renewable assets.

“We need to maintain our current market share of 54% of public generation capacity when transitioning to renewable assets,” Ong said.

“I am extremely proud to say that our union was involved in developing the workers’ plan and charter that will shape the future of our state and give our members the confidence and stability they deserve.”